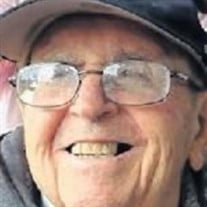 Philip Anthony Sabatino, 97, passed away peacefully on January 5, 2022, at Teresian House Nursing Center with his loving family by his side. The beloved son of Anthony and Lucia Sabatino who originally came from Province of Foggia, Italy, Phil was born on October 2, 1924, and was educated at St. Patrick's Elementary School and Christian Brothers Academy (C.B.A). He joined the U.S. Navy in 1943, and was deployed on June 11, from the US Naval Training Station in Sampton, N.Y., to the Admiralty Islands, where he bravely served his country during World War II. Noted for his compassion, friendship, and great sense of humor, Phil became active in the community. A founder and member of the Italian American Club, Phil served on the Columbus Day Organization Council; he ushered at the Blessed Sacrament Church and at St. Patrick's Church for many years; and was a lifelong member of the YMCA on Washington Avenue, until its closure. He enjoyed both watching and attending a Yankees baseball game and a Giants game. The proud owner of Sabatino's Liquor Store, Lamp Post Restaurant & Pub, and LP's Dance Club, Phil was liked by all who knew him - kind, friendly, humble, and eager to help anyone in need, earning the motto "Go see Philly if you have a problem." Living his life-long commitment to "always take care of your family," he most enjoyed spending time with his family and friends, and traveled with his wife and family to Maine, Florida, Mexico, St. Maarten, and the Caribbean. Phil was predeceased by his beloved wife, Marion (Hilton) on April 1, 1996; and daughter Sandra Schweppenhauser (husband Phillip) on January 15, 2003. He is survived by son, Anthony Sabatino (Janis), and daughter Pam Sabatino Holmes (Michael); eight grandchildren, Philip Schweppenhauser (Kelly), Karen Grignon (Michael), Lisa Catalano (Eric), Philip W. Sabatino (Stephanie), Emily Auclair (Gary), Amy Lemke (Matthew), Kimberly Thomas (Matthew), Rachel Holmes; and nine great-grandchildren, Keegan AuClaire, Kennedy AuClaire, Lleyla Grignon, Kayle Messier, Elise Marion Sabatino, Alyssa Lemke, Myles Lemke, Theo Thomas, and Hannah Thomas. The family extends heartfelt appreciation to nursing staff and caregivers at Teresian House, Washington Avenue Extension, where Phil spent the final years of his life surrounded by family and friends. Special thanks to our niece and Phil's granddaughter, Karen Grignon, for all the many hours she and her daughter, Lleyla, spent with their grandfather and great-grandfather; and to his caregivers, Nina, Brian, Chuck, Keya and Jessica for making a difference in our father's life. Relatives and friends are invited to visit with Phil's family on Monday, January 10, in the Lasak & Gigliotti Funeral Home, 208 N. Allen St., Albany from 4 to 7 p.m. Please only enter through the rear parking lot doors and masks are required. Funeral services will be on Tuesday, January 11, in the Blessed Sacrament Church, 607 Central Ave. (Father John Bradley Way), Albany at 10:30 a.m. where his funeral Mass will be celebrated. Masks are required. The Rite of Committal will take place in St. Agnes Cemetery immediately following the Mass. Memorial contributions in Phil's name may be sent to Christian Brothers Academy, 12 Airline Dr., Albany, NY, 12205 or to the Teresian House Foundation, 200 Washington Avenue Ext., Albany, NY, 12208.

Philip Anthony Sabatino, 97, passed away peacefully on January 5, 2022, at Teresian House Nursing Center with his loving family by his side. The beloved son of Anthony and Lucia Sabatino who originally came from Province of Foggia, Italy, Phil... View Obituary & Service Information

The family of Philip A. Sabatino created this Life Tributes page to make it easy to share your memories.

Send flowers to the Sabatino family.