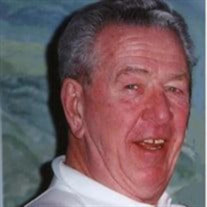 Richard A. Roth, 88, of Niskayuna, passed away on Sunday, May 15, 2022 after a long illness. Born May 13, 1934 in Lancaster, PA, he was the son of the late George T. and Lillian (Metzger) Roth. Richard graduated from Vincentian Institute (Albany) and Siena College ’56 with a BS in Economics. While at Siena, he was a member of ROTC program and later served his country as a First Lieutenant in the US Army. Richard began his career with Metropolitan Life Insurance Co., where he earned his Chartered Life Underwriter designation in 1972 and later co-founded Roth and Hilicus Insurance Agency in Rotterdam. Richard was a member of St. Gabriel’s Church, St. Kateri Tekakwitha Parish, and the Rotterdam Elks Club. He was an avid golfer and member of the Edison Country Club for over 45 years. He was active in the Siena College Alumni Association. Richard was a loving husband and father. Spending time with family gave him joy and happiness. Richard had a great sense of humor – making others laugh and feel connected. He was very loved by his family. In addition to his parents, Richard was predeceased by his siblings, George J., Joseph S., and Carl V. Roth; as well as his first wife, Helen (Gonsowski) Roth in 1991. Richard is survived by his wife of 30 years, Connie (Kessler) Roth; six children, Suzanne (Joseph Jr.) Mazone, Theresa (Eric Friedland) Roth, Allen (Rita) Roth, Elena Kessler, Maria (Daniel) McShane, and John (Darcy) Kessler; and six grandchildren, Morgan and Nicholas Mazone, Allison and Sydney Roth, and Jack and Brianna Kessler; and several nieces, nephews and cousins. A Mass of Christian Burial will be celebrated on Friday at 9am at St. Kateri Tekakwitha Parish, 1803 Union St., Schenectady. At the request of the family mask are required.

Richard A. Roth, 88, of Niskayuna, passed away on Sunday, May 15, 2022 after a long illness. Born May 13, 1934 in Lancaster, PA, he was the son of the late George T. and Lillian (Metzger) Roth. Richard graduated from Vincentian Institute (Albany)... View Obituary & Service Information

The family of Richard A. Roth created this Life Tributes page to make it easy to share your memories.

Send flowers to the Roth family.