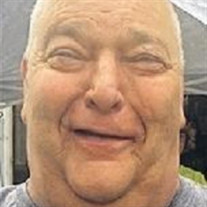 Rodney Louis Carpentier, Jr. entered into his final and eternal rest on April 12, 2022. Born on March 21, 1960, Rod grew up in Albany where he met the love of his life, Catherine. He graduated from Bishop Maginn High School in 1978 and married Cathy the next year. Rod spent 41 years working for the Flach Companies and was one of the Flach family's most trusted employees. He was a supremely talented welder and pipe fitter as well as a foreman, working on some major projects at the various plants around the Capitol Region. Rod's passion was car racing. He was on the crew for the American Boiler 77J Race Team in the 1980's, spending his weekends at the dirt track at the Lebanon Valley Speedway. He was an avid NASCAR fan and followed the careers of Dale Earnhardt and Dale Earnhardt, Jr. Rod was predeceased by his beloved wife Cathy; as well as his parents, Rodney, Sr. and Doris. He is survived by his son, Rodney Louis III and his wife Laura of Nyack; his daughter, Shannon Marie and her husband Vincent Vasto of Coeymans Hollow; his sister, Donna and her husband Patrick Sharer of Albany; his sister, Darlene and her husband Roland Mack of Kileen, Texas; his sister Denese, and her husband Daniel Bernaiche of Bristol, Conn.; and his cherished grandchildren, Fraley, Giovanna and Luciano. Rod was a treasured uncle and is additionally survived by his 10 nieces and nephews and their children. Most of all Rod was extremely proud of his children for their personal and professional achievements. He often said he didn't know what he and Cathy did, but his kids turned out great and for him that was his greatest accomplishment. Calling hours will be held on Tuesday, April 19, between 4 p.m. and 7 p.m. at the Babcock Funeral Home, Ravena. A Mass of Christian Burial will be celebrated on Wednesday, April 20, at 10 a.m. in St. Patrick's Church, 21 Main Street, Ravena. Donations may be made in Rod's honor with the Susan J. Komen Foundation for Breast Cancer Research, 13770 Noel Road, Suite 801889, Dallas, TX 75380.

Rodney Louis Carpentier, Jr. entered into his final and eternal rest on April 12, 2022. Born on March 21, 1960, Rod grew up in Albany where he met the love of his life, Catherine. He graduated from Bishop Maginn High School in 1978 and married... View Obituary & Service Information

The family of Rodney L. Carpentier Jr. created this Life Tributes page to make it easy to share your memories.

Rodney Louis Carpentier, Jr. entered into his final and eternal...

Send flowers to the Carpentier family.