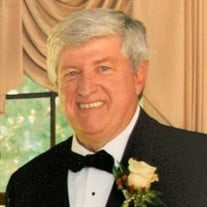 Roger W. Gibbs, 76, passed away peacefully surrounded by his family on December 8, 2021. Roger was born on October 25, 1945 in Hartford, CT to the late James and Irene (Jeffery) Gibbs. Following graduation from Windsor Locks High School. Roger continued his education and attended the Indiana Institute of Technology. In 1976, he graduated with his Master’s degree in Engineering from Rensselaer Polytechnic Institute. In 1976, Roger and his wife Susan moved to Clifton Park, where they worked and raised their family. Early in his career, Roger worked for General Electric in Schenectady, where he earned their prestigious “Engineer of the Year” award and was later an active member of the Quarter Century Club. After many rewarding years with General Electric, Roger then worked for M.A.O. (Bechtel) where he worked until his well-deserved retirement in 2008. Roger adored all things science related, from aircrafts, computer technology, and even other worldly life forms. Roger believed humans could not be the only intelligent life and enjoyed researching the idea of a life existence on other planets. It was very common for him to be educating his girls on scientific principles such as the Bernoulli Theory and the Helmholtz Resonance/Theory. He also shared his knowledge through teaching adult education at Shenendehowa, where he helped those in his classes learn the basics of computer programming. Roger is survived by his loving wife Susan P. Gibbs; daughters Sarah (Jason) DePasquale and Rachel (Benjamin) Hannur; grandchildren Lorenzo A. DePasquale and Winston B. Hannur; Cousin Catherine Brown and half-brother Douglas (Shingo) Gibbs. Friends and family are invited and may call on Monday, December 13, 2021 from 9:30-10:30am at Townley & Wheeler Funeral Home, 21 Midline Road, Ballston Lake, NY A Mass of Christian Burial will follow at 11:00am at Our Lady of Grace Church, 73 Midline Road, Ballston Lake, NY. Interment will follow in Most Holy Redeemer Cemetery, Niskayuna, NY.

The family of Roger W. Gibbs created this Life Tributes page to make it easy to share your memories.

Roger W. Gibbs, 76, passed away peacefully surrounded by his...

Send flowers to the Gibbs family.