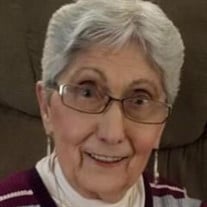 Theresa R. Gizzi, 88, passed away peacefully on March 12, 2022 at St. Peter's Nursing & Rehabiliation Center, surrounded by her loving family. She was born November 14, 1933 in Albany to the late Salvatore and Anna Sgroi. Theresa graduated from St. Josephs High School in Albany, married her high school sweetheart and followed him to Texas while he was in the United States Army. Upon their return to Albany, she raised 6 wonderful children while working for 27 years at the Carl Co. before going on to work at Catholic Charities for many years. She was an avid Yankee fan, loved to listen to Frank Sinatra, and enjoyed traveling with her husband Paul and later with the Rotterdam Senior Citizens. Her favorite past time was to cook for anyone and everyone she could. The thing that made her happiest was having her whole family together. Theresa was predeceased by her husband Paul T. Gizzi Sr, and her brother Salvatore Sgroi. She is survived by her sister, Sister Rosemary Sgroi, 6 children Paul T. Gizzi Jr, (Trish), Judy Karbowski (John), James Gizzi (Susan), Lynn Horan (Michael), Teri Prendergast (Rich), Nicole Bahrmann (Steven White), 12 grandchildren, Gina, Shannon and Annalise Gizzi, John Karbowski (Tami), Jared Karbowski (Jennifer), Jenessa Gabriele (Jordan), Mary Dlabaj (Robert), Kristyn Garcia (Christian), Michael Horan (Kailee), Kevin Horan, Paul and Quinn Bahrmann, as well as 7 great grandchildren and many cherished nieces and nephews. We would like to thank all the doctors, nurses and staff at St. Peter's Nursing & Rehabiliation Center for their unending care and love for our mom while she was there. In lieu of flowers, contributions can be made to Catholic Charities or the Alzheimer's Association. Calling hours will be held on Thursday March 17th from 9am-11am with a Mass to follow at 11am at St. Madeline Sophie Church, 3510 Carman Road Schenectady. Interment immediately following in Most Holy Redeemer Cemetery.

The family of Theresa R. Gizzi created this Life Tributes page to make it easy to share your memories.

Send flowers to the Gizzi family.