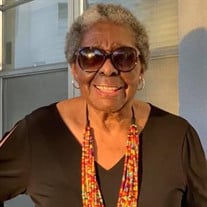 Vernell was born on August 16, 1927, in Oakdale Louisiana. She was the sixth of seven children born to Henry and Mary Allen. For her early education she attended the Allen Parish School. Upon the passing of her parents, Vernell and her sister moved to NYC to live with their oldest sister. Vernell finished her schooling at George Washington High School in Manhattan. In early 1943, Vernell moved to Brooklyn, NY where she attended and graduated from Brooklyn School of Beauty Culture. After graduation, she worked at Rose Meta House of Styles in Manhattan and Brooklyn. There she met her best friend Marion Williams, godmother to Vernell’s daughter. Vernell moved to Albany, NY in 1955 and partnered/co-owned various beauty salons throughout the Capital Region. In 1967, Vernell opened her own beauty salon, Vernell’s House of Styles, on Columbia Street. In 1978, Vernell bought a building on Washington Avenue and in 1979 she opened Vernell’s House of Styles at this location with her daughter. The salon offered various hair, skin, face, body and nail services. Over the years, Vernell was invited by community organizations to produce hair and fashion shows in the Capital Region and NYC. She mentored many up-and-coming barbers and beauticians. Vernell had many dedicated customers who became lifelong friends. Some of her customers have been coming to her since she moved to Albany, and she spent time with them in and out of the beauty salon. Vernell continued to work even at the age 94. Vernell was involved in, recognized by and received awards from various community organizations. She was co-founder of Ebony Professional Beauty and Barber Association, United Black Parents and Black Apostolate of the Diocese of Albany. She was the President of St. John’s Parish Council, on the advisory boards for Bishop of Albany, Project Lift and St. John/St. Ann’s Choir. On February 15, 2022, Vernell was called home. She was the last surviving child of Henry and Mary Allen. Vernell is survived by her daughter Ahimsa (Nona) Teabout. Three grandchildren – John Teabout Jr., Toni Teabout-Callins, Onna Cooley. Seven great grandchildren – Tahle Teabout, John Teabout III, Kayla Teabout, Breahna Teabout, Deson Cooley, Anthony Calabro and Isaiah Teabout. Three great great grandchildren – Isaac Sherlock, Millie Nova Sherlock and Baby Cooley (arriving soon). Several nieces, nephews and a host of very dedicated customers and friends.

Vernell was born on August 16, 1927, in Oakdale Louisiana. She was the sixth of seven children born to Henry and Mary Allen. For her early education she attended the Allen Parish School. Upon the passing of her parents, Vernell and her sister... View Obituary & Service Information

The family of Vernell Allen created this Life Tributes page to make it easy to share your memories.