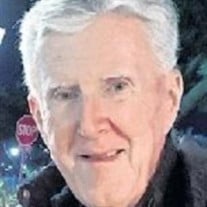 William Leo O'Toole Jr. of Sarasota, Fla. and formerly of Newtonville, died peacefully at home surrounded by family on February 2, 2022, after a battle with Parkinson's disease. Bill was born on February 9, 1944, in Chicago and raised in Rensselaer. Bill received a Bachelor of Architecture degree from the University of Miami in Coral Gables, Fla. Bill completed basic training in 1968, at Fort Sam Houston, before serving in the New York Army National Guard as a medic. He then began work for Lux and Quackenbush, an architecture firm in Albany where he met his soulmate and best friend, Mary Lou. In 1978, he began a career with EOE, Inc. where he eventually served as president until the company was sold in 2012. Bill served on the Board of Trustees of St. Gregory's School for Boys and the Board of Governors of the Albany Sons of St. Patrick. Bill moved full-time to Sarasota, Fla. in 2012, where he enjoyed spending time with his Minor League friends and the residents of University Park. He also cherished spending summers in Saratoga Springs and time with his children and grandchildren in New York and Washington, D.C. Bill is survived by his loving wife of nearly 53 years, Mary Louise (Klarnick) O'Toole; his two children, Cortney O'Toole Morgan (Kirk) and William Peter O;Toole (Jennifer); five grandchildren, Healey Grace Morgan, William Kirk Morgan, William Harrison O'Toole, Emilia Louise O'Toole and Charlotte Olivia O'Toole; and his two sisters, Dorothy Beberwyck (Brian) and Terry Kois (James). He was predeceased by his parents, William L. O'Toole Sr. and Katherine S. O'Toole. A memorial service will be held at a later date in New York. Arrangements have been entrusted by the family to Toale Brothers Funeral Home. In lieu of flowers, memorial contributions may be made to The Michael J. Fox Foundation for Parkinson's Research, Tidewell Hospice or a charity of your choice.

William Leo O'Toole Jr. of Sarasota, Fla. and formerly of Newtonville, died peacefully at home surrounded by family on February 2, 2022, after a battle with Parkinson's disease. Bill was born on February 9, 1944, in Chicago and raised in Rensselaer.... View Obituary & Service Information

The family of William L. O'Toole created this Life Tributes page to make it easy to share your memories.

Send flowers to the O'Toole family.